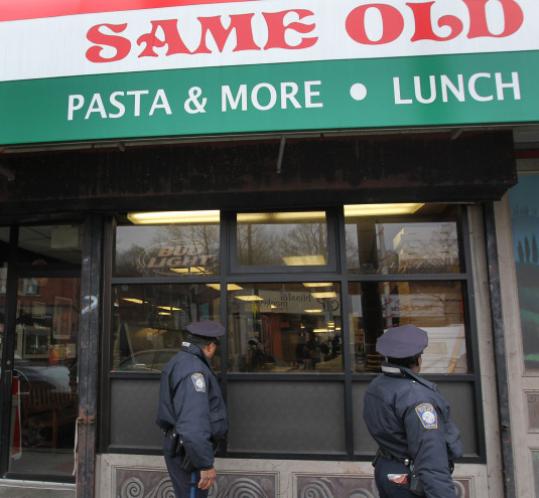 This past Sunday, three young men were Murdered as a result of the gun and knife fight inside the Same Old Place Pizza shop in Boston’s Jamaica Plain neighborhood. Boston Police now believe that the incident was gang-related.

According to the Boston Police Department and witnesses on scene, shots were fired at around 7:30 on Sunday. An altercation that initially began with fists, led to a knife being drawn and then a gun. When Boston Police Officers responded on scene, one 21 year old man was found suffering from stab wounds; another 21 year old man and a 28 year old man both were found to have been shot. All three men were transported to Boston hospitals where they eventually succumbed to their wounds.

A fourth vicitm, a female pedestrian who happened to be in the area at the time shots were fired, was struck in the leg. She was taken to the hospital with non-life-threatening injuries where she was treated and released.

At least two of the shooting victims have been identified: one as Ariel Dume, 20, of Dorchester; the other as Johnell Cruz, of Jamaica Plain. A Boston Police spokeswoman revealed today that all three of the victims that were killed in this incident were all ‘associated’ in some way with gang activity.