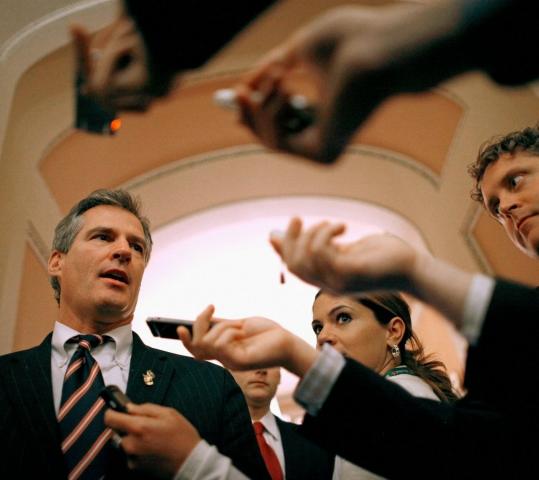 As we have all heard by now, Massachusetts Senator Scott Brown revealed earlier in the week that he was a Sex Crimes victim. According to his new book and soon to be seen 60 Minutes interview, when he was 10 years old, he was sexually abused by a counselor at a Massachusetts summer camp.

If Senator Scott Brown was really sincere about his reasoning for revealing something so personal about his past, something not even his parents and other members of his immediate family knew about, then why does he refuse to answer reporters’ questions about it until 60 Minutes airs his interview? …if he is so sincere about it and wants to help victims and use his influential position as a state senator to do so, then why wait until you write a book to come out? The answer, of course, is because it’s all about the $$$. …why doesn’t he reveal how much 60 Minutes is paying him to keep hush until his interview airs?

That’s why, irrespective of whatever may have happened to Scott Brown growing up, his motives for now bringing this information forward clearly don’t seem genuine…especially from a political standpoint, as he will now prepare his re-election campaign for 2012.

If supporting victims of sex crimes was an issue so close to his heart, then why did he endorse Republican Jeff Perry, who ran for Congress and was accused of witnessing and doing nothing while a 14 year old girl was sexually assaulted by another police officer?

Because victims’ rights and sexual molestation is such a sensitive issue, the media, of course, steers clear about saying anything negative whatsoever about Senator Scott Brown’s revelations. On the other hand, what he reveals raises more questions about his ability and integrity to hold such a high political position on behalf of Massachusetts.

Scott Brown, for example, has refused to name the counselor at the camp who sexually abused him. But what if there were other victims? What if this counselor did something more grievous to other children? Even more concerning, what if this person continues to sexually abuse and perhaps even rape younger children even to this day?

…Doesn’t his decision to not identify and see prosecution of the alleged ‘abuser’ put others at risk? How is he then putting victims’ rights and the safety of the citizens of Massachusetts as his ‘top priority’?

Perhaps this traumatic experience has affected him to such an emotionally degree that I’m not quite sure he is in a position to adequately fulfill his demanding duties as a United States Senator.

Boston Criminal Lawyer is available 24/7 for consultation on all Massachusetts Sex Crimes, such as Rape and Indecent Assault & Battery on a Child Under 14.