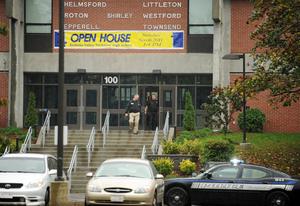 A Westford High School student was arrested by Westford Police after he allegedly brought a large pellet gun that resembled an assault rifle into school. He is scheduled to be arraigned today in Lowell Juvenile Court on Massachusetts Crimes of Violence Charges, including Assault & Battery with a Dangerous Weapon, Carrying a Dangerous Weapon on School Property; and Unlawful Possession of a BB Gun.

According to police, the teenager, a 16 year old sophomore student at Westford High School, walked into the high school and allegedly began pointing the weapon in the direction of students. He eventually made his way into the school cafeteria, that was filled at the time with about 150 high school students.

The incident involving the student, who was reportedly under suspension at the time, caused school officials to put the school in lockdown.

After entering the cafeteria, he was reportedly tacked by Matthew Richard, the assistant principal, and held by other faculty members until police arrived.

In Massachusetts, the crime of Assault & Battery with a Dangerous Weapon is punishable by imprisonment in the House of Corrections for up to 2.5 years, or to state prison for up to 10 years.

In order to be convicted of the crime of Assault & Battery with a Dangerous Weapon, the prosecutor would have to prove that the defendant intentionally touched the person of another without any right or excuse and that it was done with a dangerous weapon.

As of this time, all reports seem to suggest that the student did nothing more than enter the school and allegedly point the BB gun at other students. In other words, it’s unclear whether he actually struck or hit anyone else with the gun. If so, it appears more of circumstances involved Assault with a Dangerous Weapon, that involves conduct where no actually touching was committed.

Boston Criminal Lawyer Lefteris K. Travayiakis is available 24/7 for consultation on all Massachusetts Crimes of Violence Charges, including Assault & Battery with a Dangerous Weapon.