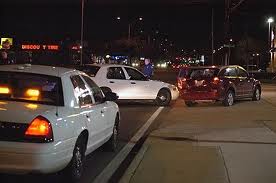 The passenger of the car, Stedmon Hill, was charged with Receiving Stolen Motor Vehicle.

According to the Boston Police Department, officers initiated pursuit of the car after discovering it had been reported stolen following a check of its ‘disfigured license plates.’ When police officers activated their lights and sirens, the car allegedly turned onto Dimock Street, striking a pedestrian. The driver, Michael Johnson, allegedly refused to stop and continue down a one-way street and collided with another car.

At some point, Boston Police alleged that both Johnson and Hill got out of the car and allegedly fled. Both were pursued on foot and arrested nearby.

In many types of cases charging the Crime of Receiving Stolen Property, the government will have to prove, beyond a reasonable doubt, that both defendants had knowledge that the car was stolen. Simply leading the police on pursuit and/or fleeing from the car, although in many instances could be considered ‘consciousness of guilt,’ may not be enough.

In other words, there may be other valid reasons why the individuals did not stop for the police or fled from the car, thereby refuting any evidence of consciousness of guilt. For example, the persons had outstanding arrest warrants or had other contraband on their person.

In any case, the potential penalties involved in a conviction for a Massachusetts Theft Crime could be severe, including potential incarceration and/or a very lengthy term of probation, and those charged with such crimes should Contact a Boston Theft Crimes Lawyer.