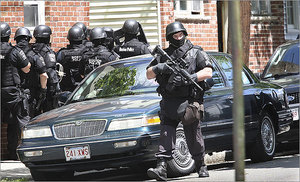 Five men were detained Sunday in an early morning raid on Spruce Street in Chelsea, Massachusetts. The incident was prompted when Chelsea Police received a call that three men attempted to rob Jose Benitez and a female at gunpoint at 8:15 a.m., and then ran into 258 Spruce Street. Benitez told Chelsea Police that the men initially took jewelry and a watch, and then tried to Carjack his Cadillac Escalade.

The Lowell Police Department have arrested a 23 year old man in connection with the robbery of a Getty Gas Station last Monday. The man, whose name has not been disclosed, was charged with Kidnapping and Armed Robbery, and is expected to be arraigned on those criminal charges in Lowell District Court this week.

Lowell Police report that the man, who is a regular customer and had even worked at the station he robbed in the past, was likely hiding behind a dumpster when he pulled a gun on a store clerk as he was locking up. The store’s alarm, however, had already been triggered, so the suspect quickly grabbed some money and ordered one of the clerk’s to drive him away. He was driven around the neighborhood for a short time, until he got out of the car and fled on foot. Interestingly, it was also reported that the armed robber had also gone to the store earlier in the evening and told someone that he planned on robbing the store.

END_OF_DOCUMENT_TOKEN_TO_BE_REPLACED

Kevin Ireland, 54 of Gloucester, Massachusetts, was arrested yesterday for the murder of a woman in a Gloucester funeral home that occurred 34 years ago. Also charged with murder was Norman Pike of San Francisco, who was the grandson of the funeral home owner and who fled the Gloucester area shortly after the murder and began using the alias “Dan Franklin.”

Norman Pike was arrested this past Monday by officers from various agencies, including the Gloucester Police Department and Massachusetts State Police. At this time, he has contested rendition from California and it could take up to 3 months to have him brought to Massachusetts to be arraigned on Murder charges in Gloucester District Court.

The Essex County District Attorney’s Office alleges that Ireland, Pike, and a third man who is now deceased, went to rob the funeral home’s safe. During the robbery, it is believed the victim walked in on the two men and was then murdered.

END_OF_DOCUMENT_TOKEN_TO_BE_REPLACED

On March 3, 2010, Edward Corliss, 64 of Roslindale, was arraigned in Suffolk Superior Court and held without bail, charged with Armed Robbery While Masked, Unlawful Possession of a Firearm, and the murder of Surendra Dangol while he was working at Tedeschi’s in Jamaica Plain on December 26.

The Suffolk County District Attorney’s Office alleges that Edward Corliss entered the Tedeschi’s at about 3:00 p.m., concealing his appearance with heavy clothing, a scarf and a wig. Store video surveillance captures Corliss allegedly pulling out a gun and pointing it at Dangol and ordering him to place the store’s cash into Corliss’ backpack. Dangol is then shown with his arms up, at which time Corliss pointed the gun at his chest and shot him.

Boston Police Investigators had also obtained video footage of the suspected vehicle Corliss got away in. After consulting with auto experts, a database search of the make and model of the vehicle was narrowed, leading police to Corliss’ home. The Plymouth Acclaim, registered to Corliss’ wife, was found in the back of the residence.

END_OF_DOCUMENT_TOKEN_TO_BE_REPLACED

Boston Police are looking for two armed men who shot and killed 71 year old store clerk Gerald Serrano at Hermanos Unidos convenience store in Roxbury, Massachusetts, yesterday morning. It is reported that the clerk was shot because he resisted the demands of the robbers.

Boston Police have not disclosed how much money the two armed robbers were able to get away with, if any. Both armed suspects have been described as black males, one wearing all black and the other wearing all red, each with hooded sweatshirts.

The murder of Gerald Serrano comes only two months after the murder of Surendra Dangol, who was also shot and killed at his convenience store in Jamaica Plain, Massachusetts. Arrested for that murder was Edward Corliss, who had been previously convicted of killing another store clerk in Salisbury in 1973. Edward Corliss had been released in 2006 by the Massachusetts Parole Board for that 1973 murder.

END_OF_DOCUMENT_TOKEN_TO_BE_REPLACED

Two masked gunman committed an armed robbery of a Hingham jewelry store at closing time last evening.  Both men, one with a handgun and the other with a shotgun, cornered the store owner and employees at the back door as they were leaving, forcing them back inside and emptied the safe.  If caught, both men face charges of Kidnapping and Masked Armed Robbery.

At one point, the store’s alarm company called after the alarm had been triggered, but with a gun pointing at him, the store’s owner told the alarm company that everything was OK.  After two 911 calls by store employees, police surrounded the building, but the suspects had already fled.  The only leads reported were that one of the men had on a M&M’s candies jacket, and that they escaped in a gray 2005 Toyota Camry.

Massachusetts General Laws Chapter 265, Section 26 defines Kidnapping as forcible or secret confinement of another against his will.  The maximum penalty for Kidnapping in Massachusetts is ‘any term of years’ up to life imprisonment.