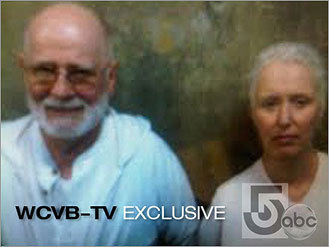 James “Whitey” Bulger, the purported Boston mobster who has been on the run for 16 years, was arrested last night in Santa Monica, CA, where he had reportedly been living in a rent-controlled apartment complex with his long-time girlfriend, Catherine Greig, 60.

Whitey Bulger, now 81, wanted for 19 murders and who had been on the FBI’s Ten Most Wanted List, was brought into Federal court this afternoon where he executed the paperwork waiving any contest to extradition and agreed to return to Massachusetts. When asked, Bulger admitted his true name was James J. Bulger; and also stated that he was pretty familiar with the charges against him.

Catherine Greig also agreed to return to Massachusetts without contest to face her own criminal charges.

END_OF_DOCUMENT_TOKEN_TO_BE_REPLACED

Frank James Webb, III, of Brockton, was arraigned yesterday morning in Brockton District Court on Massachusetts Murder Charges in connection with the death of Jennifer Teixeira, 51, who was shot in the back as she was leaving church.

Webb has been charged with 1st Degree Murder and Gun Crimes Charges.

According to the Plymouth County District Attorney’s Office, Frank J. Webb, III, got into an argument with another man this past Saturday inside a Boost Mobile store in Brockton. At some point, the argument became physical, at which time a man wearing a red hooded sweatshirt went outside the store and and from the street, started firing from a handgun. One of those shots, however, struck Jennifer Texeira, who had just left the Mount Moriah Baptist Church.

END_OF_DOCUMENT_TOKEN_TO_BE_REPLACED

Marco Tulio Flores, 17, was arraigned on Massachusetts Murder Charges this morning in East Boston District Court in connection with the death of Jaime Galdamez, 28, who was found dead lying in bed in the basement of an East Boston home Monday morning.

According to Boston Police and the Suffolk County District Attorney’s Office, the body of Jaime Galdamez was discovered Monday morning when the Boston Fire Department responded to 877 Saratoga Street for a fire in the basement. A search of the basement revealed the body of Jaime Galdamez, who was lying in his bed. Because he was bound with duct tape, Boston Police Homicide investigators were called to initiate a murder investigation.

Today, however, prosecutors reported that Marco Tulio Flores went to the Boston Police allegedly admitted that he was the person responsible for the death of Jaime Galdamez. In his statement, Flores allegedly explained that the two had a verbal argument, which then became physical and led to Flores allegedly strangling Galdamez. He had bound Galdamez with duct tape and then set him on fire.

END_OF_DOCUMENT_TOKEN_TO_BE_REPLACED

Eugene Sutton, 46, currently serving 5-10 years in a Massachusetts State Prison on Drug Crimes Charges, was indicted by a Suffolk County Grand Jury in connection with the 1989 murder of 38 year old Richard Gleason. He was arraigned this week in Suffolk Superior Court on First Degree Murder Charges.

According to the Boston Police Department and the Suffolk County District Attorney’s Office, Richard Gleason was murdered on May 16, 1989, inside a School Street apartment that, at the time, was reportedly used by drug users. Gleason, who at the time was working as a delivery driver for a Quincy area food shelter, was stabbed 18 times.

Presently, Eugene Sutton is in custody an unrelated drug charges in a Massachusetts prison where he is serving his time. Following his arraignment on Massachusetts Murder Charges in Suffolk Superior Court, Sutton was ordered held without bail.

END_OF_DOCUMENT_TOKEN_TO_BE_REPLACED

Massachusetts State Police executed a search warrant of the Lowell home of Rafael Martinez and discovered a pipe bomb. Martinez was arraigned in Lawrence District Court this week on Massachusetts Murder Charges and Gun Crimes Charges in connection with the death of Timothy Walker.

According to the Essex County District Attorney’s Office, Rafael Martinez, in the company of some friends, is alleged to have approached Timothy Walker while he was sitting on the steps of his grandmother’s front porch in Lawrence on July 24, 2010. It is alleged that Martinez had in his possession a shotgun, which he then used to shoot Timothy Walker in the head.

Following the shooting, Martinez allegedly left the area in a Nissan Murano driven by one of his friends. It’s not known if police have identified the registered owner of the vehicle and/or the driver. If found, it’s likely that he would also be charged in connection with this incident, most likely as an Accessory After the Fact to Murder.

END_OF_DOCUMENT_TOKEN_TO_BE_REPLACED 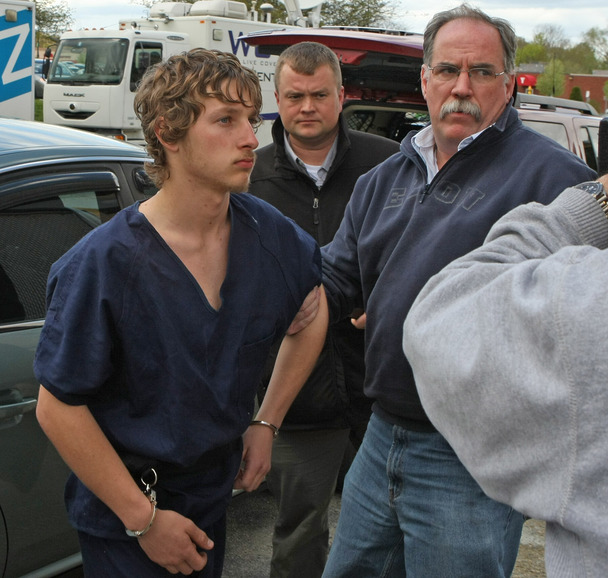 Matthew Worster, 17, of Easton, Massachusetts, was arraigned today on Murder Charges for allegedly killing his own mother and then burying her in their backyard. He was arraigned this morning in Taunton District Court the charge of Armed Assault with Intent to Murder.

According to the Bristol County District Attorney’s Office, Matthew Worster allegedly killed his mother, Beth Spartichino, because he was angry over his parents divorce. He allegedly told his younger brother that he shot their mother because ‘they would be better off”. Easton and Massachusetts State Police searched the backyard of the family’s Easton home and did recover the body of Beth Spartichino in a shallow grave in the backyard. The official cause of death is yet to be determined pending an autopsy, but officials did reveal that the body appeared to have a gunshot wound to the back.

According to the District Attorney’s Office, Worster also called his father, Michael Worster, and left a voicemail suggesting he had done something to his mother. In the voicemail, Worster allegedly stated “I did what I had to do”. After listening to the voicemail, Michael Worster then called the Easton Police Department and reported that he feared his ex-wife was dead and that his son committed the murder.

END_OF_DOCUMENT_TOKEN_TO_BE_REPLACED 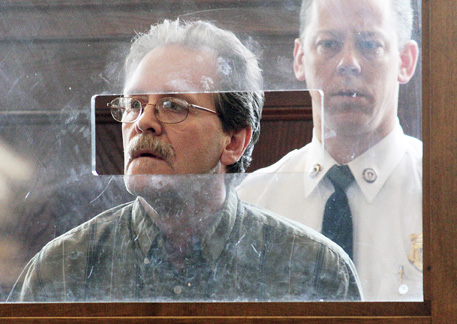 Walter Shelley, 60, of Tewksbury, Michael Ferreira and Edward Alan Brown, were all arraigned yesterday in Lowell District Court on various Massachusetts Murder Charges in connection with the 1969 murder of John J. McCabe.

The Middlesex County District Attorney’s Office alleges that John McCabe, then 15, was walking home from a teen dance on September 26, 1969, when he was abducted and taken to an empty lot in Lowell, Massachusetts. The three men alleged to be the abductors are Walter Shelley, Michael Ferreira and Edward Alan Brown, then teenagers themselves.

Prosecutors believe that Ferreira grabbed McCabe and dragged him into their car. The three men then allegedly assaulted him along the way, and once in Lowell, bound McCabe’s hands and feet with a rope and covered his mouth and eyes with tape. According to the Lowell Police, the men wanted to teach him a lesson.

END_OF_DOCUMENT_TOKEN_TO_BE_REPLACED

David McCall, 72, of Wakefield, was arrested early this morning for the Murder of his wife at their home.

According to the Wakefield Police Department, David McCall and his wife were having an argument in their home. The argument then allegedly led to McCall retrieving a gun and shooting his wife, Elane M. McCall, in the kitchen. She was transported to Melrose-Wakefield hospital where she was pronounced from a single gunshot wound to the chest.

After allegedly murdering his wife, David McCall then reportedly tried to turn the gun on himself, was but unsuccessful in his attempt.

END_OF_DOCUMENT_TOKEN_TO_BE_REPLACED

Sajan Christensen, 18, and Adam Martin, 17, both of Beverly, were arrested last night on Massachusetts Murder Charges in connection with the death of James Vernazzaro, 26, also of Beverly.

Both Christensen and Martin were arraigned in Salem District Court this morning on First Degree Murder Charges.

According to the Beverly Police Department, police officers responded to caller reporting an assault at Balch Park on Cabot Street. James Vernazzaro was found unconscious and suffering from multiple stab wounds. He was rushed to Beverly Hospital where he was pronounced.

END_OF_DOCUMENT_TOKEN_TO_BE_REPLACED 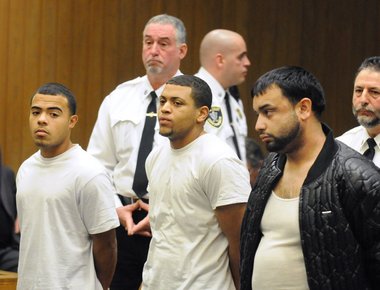 The four men, Ramos Diaz, 19, Armondo Olivares, 17, and Lionel Lopez, 18,, all of Springfield, as well as Javier Nieves, 18, of Boston, have all been charged with FIrst Degree Murder.

Diaz and Olivares were both arrested yesterday on arrest warrants by Springfield Police officers, while Javier Nieves walked into Springfield District Court when he learned that there was an outstanding warrant for his arrest. Lionel Lopez, meanwhile, was already in custody in connection with the Massachusetts Murder of Jose Colon.