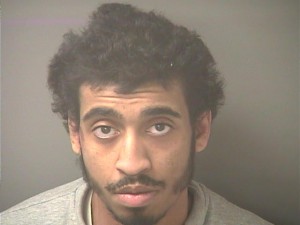 Darryl Max Dookhran, 18, was arrested yesterday on Massachusetts Gun Crime Charges for allegedly unlawfully carrying a firearm on the campus of Mass. Bay College where he is also a student.

According to the Wellesley Police Department, “an investigation” was conducted with regards to Dookhran and he was asked to speak with detectives. At some point, when police tried to pat him down, Dookhran allegedly backed against a wall and resisted the officer’s attempt by punching and kicking them. A search of Dookhran’s backpack revealed a loaded semi-automatic 9mm gun.

Notably, no information has been released as to why Dookhran was being investigated in the first place…

Although at first glance it may appear that the ‘men in blue’ at the Wellesley Police Department did a wonderful job at apprehending a criminal, it does seem that they may have made an egregious violation of Dookhran’s Consitutional rights and, in the process, jeopardized their case against him. Simply based on the details that have been released concerning Dookhran’s arrest, it may be that the police officer’s were not justified in pat frisking him…

Under Massachusetts Constitutional law, not every encounter between a person being ‘investigated’ and a potential suspect gives rise to the justification to pat frisk that person. The law recognizes that even a frisk of someone’s outer clothing is an intrusion and will only be justified if there is reasonable apprehension of danger to the police. In other words, if there is no danger, then a pat frisk is not justified.

In Dookhran’s case, so long as there is no evidence that he made any over movements, statements did anything else to warrant the officers in fearing for their safety, then their attempting to pat frisk him should be challenged by way of a Motion to Suppress. If successful, then all the subsequent evidence obtained, i.e., the gun, ammunition, etc., will be suppressed or excluded from the case against him.