Earlier this month, Massachusetts enacted the “Act Relative to Domestic Violence”. Though arguably the intent of the act is in good faith, it has very profound and serious implications on those defendants charged with a domestic violence offense in Massachusetts, directly altering the landscape at a defendant’s arraignment and bail, as well as the potential criminal penalties a defendant may face.

First, persons who are charged with a criminal offense that involves ‘domestic abuse’ are not eligible for release or bail within 6 hours from their arrest (unless the release or conditions of bail are imposed directly from a judge in court).

END_OF_DOCUMENT_TOKEN_TO_BE_REPLACED

The Massachusetts Supreme Judicial Court considered the case of Silva v. Carmel, and decided that an abuse prevention order may issue where the defendant and victim live in the same state facility may not issue.

Both the defendant and the victim in this case were intellectually disabled persons who both resided at the same state-residential facility of the Department of Developmental Services. Following an altercation where the defendant pushed the victim into a bathtub and caused her injuries, the victim applied for and obtained a restraining order from a district court judge. The order was issued for one year following the judge’s finding that both parties resided in the same “household”.

On appeal, the SJC agreed with the defendant that the district court judge was mistaken in issuing the restraining order because the parties (1) did not reside together in the same household as contemplated by the statute; and (2) the relationship of the parties was not of the type the abuse prevention statute set out to protect.

END_OF_DOCUMENT_TOKEN_TO_BE_REPLACED

A man who used to reside in Lowell was arrested on a fugitive warrant in New York and returned to Massachusetts to face Violent Crime Charges relative to a 2011 home invasion in Lowell.

The defendant, Samuel Merced, 22, was arraigned in Lowell District Court and charged with Home Invasion, Assault & Battery, Intimidation of a Witness, Malicious Destruction of Property and Violation of Abuse Prevention Order.

According to the Lowell Police Department and the Middlesex County District Attorney’s Office, the defendant allegedly assaulted his pregnant ex-girlfriend in the summer of 2011, grabbing her by the jaw and threatening her with a knife. At the time, there was reportedly an active restraining order in place.

END_OF_DOCUMENT_TOKEN_TO_BE_REPLACED 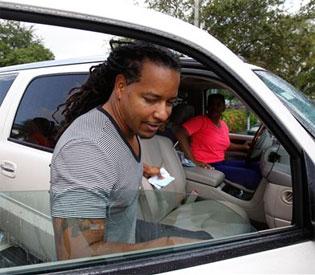 Manny Ramirez, formerly outfielder for the Boston Red Sox, was arrested this morning at his home Florida home on Domestic Violence Charges agains his wife, Juliana Ramirez. He was expected to be arraigned this morning charges of Assault & Battery.

According to the police, Juliana Ramirez alleged that Manny Ramirez hit her with an open hand with enough force to cause her head to hit the headboard of the bed. Police also reported observing visible injuries on Ms. Ramirez’ face, noting that it was red and swollen, and also had a bump on the back of her head.

END_OF_DOCUMENT_TOKEN_TO_BE_REPLACED

According to the Lawrence Police Department, Emanuel Quadros allegedly admitted to striking and injuring his infant son last May, which left the child with broken ribs and permanent brain injuries resulting in blindness and possible confinement to a wheelchair.

Quadros was arraigned yesterday in Lawrence District Court and held on $75,000 cash bail.

END_OF_DOCUMENT_TOKEN_TO_BE_REPLACED

Erica Ryan was arrested yesterday on Massachusetts Violent Crimes Charges after she allegedly punched her two year old son on an MBTA bus. She was arraigned this morning in the Roxbury Division of the Boston Municipal Court on the charge of Aggravated Assault & Battery.

According to MBTA Police and the Suffolk County District Attorney’s Office, Erica Ryan was on an MBTA in Roxbury with her 2 year old son yesterday afternoon. After the child refused to eat what Ryan was attempting to feed him, Ryan allegedly punched the child in the mouth with a closed fist. Witnesses on the bus described Ryan as allegedly winding up and punching the child in the face with full force, causing the child’s head to snap back into the stroller. Police officers who arrived on scene reportedly observed dried blood on the child’s mouth.

After the alleged assault, Erica Ryan reportedly tried to get off the bus with the baby, but was confronted by other passenger who had witnesses the incident. The bus driver called the police and the other passengers held Ryan at bay until the police arrived. Suffolk County prosecutors represented that the incident was recorded on the bus’ surveillance system.

END_OF_DOCUMENT_TOKEN_TO_BE_REPLACED

Dario Finkel, 26, of Salem, Massachusetts, was charged on several Crimes of Violence and Domestic Violence Charges for the alleged Attempted Murder of his 7 week old son.

According to the Essex County District Attorney’s Office, Salem Police Officers responded to Finkel’s home, along with paramedics, and determined that Dario Finkel allegedly stuffed a baby wipe in the infant’s mouth to get him to stop crying. Finkel also allegedly dropped the infant to the floor and threw him. According to paramedics who responded to the home and evaluated the baby, there was bruising on the baby’s stomach and upper link.

Finkel was arraigned in Salem District Court and charged with Attempt to Commit Murder, Reckless Endangerment of a Child, Aggravated Assault & Battery, and Domestic Violence Charges. Following his arraignment, he was held without bail pending a Dangerousness Hearing.

END_OF_DOCUMENT_TOKEN_TO_BE_REPLACED

A Boston Police Officer has been charged with two counts of Assault & Battery arising from a domestic altercation that involved his wife and mother-in-law last weekend.

David Marchant, 26, of Dorchester and a patrolman for the Boston Police Department, was arraigned on two charges of Assault & Battery. A not guilty plea was entered at his arraignment, and he was released on $200 cash bail.

According to the Boston Police Department, Marchant allegedly returned home with his wife after a night out and began arguing. As the argument escalated, Marchant allegedly pushed and slapped his wife, at which point his mother-in-law tried to diffuse things. Marchant then allegedly pushed her. The argument between Marchant and his wife allegedly continued to the second floor, and it was reported that he again slapped his wife, which caused her to fall down a flight of stairs. Believing her daughter was unconscious as a result of the fall, the mother-in-law called 911.

END_OF_DOCUMENT_TOKEN_TO_BE_REPLACED

John Reilly, 60, was arrested by police this weekend for allegedly trying to strangle his wife. The incident occurred this past Friday at Massachusetts General Hospital where his wife was a patient.

According to police, Reilly was allegedly observed by hospital staff shaking and pushing his wife up and down while holding her by the neck. No information regarding his wife’s injuries were disclosed by the police, nor what prompted the alleged attack.

Reilly is scheduled to be arraigned this week at Boston Municipal Court on charges including Attempted Murder and Assault & Battery.