The Equal Protection Clause of the 14th Amendment to the United States Constitution and Article 12 of the Massachusetts Declaration of Rights place limitations on the use of peremptory challenges. Generally, a party cannot exercise a peremptory challenge of a prospective juror if the reason is based by virtue of their membership in or their affiliation with particular defined groupings in the community, such as race, sex or religion.

When a party challenges the opponents use of a peremptory challenge, the judge must evaluate the objection based on a 3-step process:

END_OF_DOCUMENT_TOKEN_TO_BE_REPLACED

The Massachusetts Court of Appeals recently affirmed an order from the Superior Court holding a petitioner in contempt for refusing to abide by an order to unlock his iPhone following a request from a Middlesex County Grand Jury.

A grand jury hearing facts in an ongoing investigation in Middlesex County involving an alleged assault and battery on two children requested that the prosecutor seek an order from a Superior Court judge ordering a person to produce the PIN code and/or password for his iPhone.  A search warrant had issued out of the Lowell District Court authorizing a search of the phone, but the person refused to provide the PIN code. Following a hearing, a superior court judge entered an ordered detailing protocol how the petitioner would enter the PIN code so that the search warrant could be executed. This order also barred the prosecutor from introducing evidence against the petitioner’s “act of production” of providing the PIN code in any prosecution against him.

As a result, the person was held in contempt following his refusal to comply with the judge’s order and, thereafter, petitioned to the appeals court on the question of whether (a) he could be forced to provide the PIN/passcode to the iPhone; and (b) consequently, whether the contempt order was lawful. END_OF_DOCUMENT_TOKEN_TO_BE_REPLACED

In a recent decision in Commonwealth v. Garvey, the Massachusetts Supreme Judicial Court agreed with the defendant that the habitual criminal statute required that the underlying convictions be based on separate incidents of criminal episodes. Because, in this case, the prosecutor failed to submit evidence to the grand jury that the prior criminal episodes arose from separate incidents, the supreme court affirmed the trial court’s dismissal of the habitual offender indictments. END_OF_DOCUMENT_TOKEN_TO_BE_REPLACED

The Massachusetts Appeals Court recently rejected the Commonwealth’s appeal from the suppression of drug evidence by the trial court, holding that the judge properly suppressed the drugs seized from the defendant because the Boston Police conducted an unlawful search and seizure of his person.

In the case of Commonwealth v. Johnny Evans, the defendant challenged the stop by the police and claimed that he was subjected to an unlawful search and seizure, despite the recovery of cocaine. The judge who heard the defendant’s motion to suppress agreed, ruling that the stop was unconstitutional, and suppressed the cocaine.

END_OF_DOCUMENT_TOKEN_TO_BE_REPLACED

A Somerville High School student was arraigned yesterday on several Massachusetts Sex Crimes Charges, including Aggravated Rape of a Child in connection with the alleged sexual assault of another young high school athlete with a broomstick.

Police allege that the three students took a broomstick to rape and sexual assault a freshman student; and also tried to do the same to two other students but they were able to escape. According to prosecutors, blood and other evidence was recovered from the scene.

END_OF_DOCUMENT_TOKEN_TO_BE_REPLACED 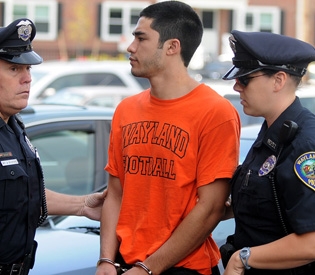 Nathaniel Fujita was arrested and has been charged in connection with the Murder of Lauren Astley, the Wayland teenager whose body was found in a wooded marsh area along Route 27 near a Wayland beach.

Fujita was arraigned this morning in Framingham District Court on 1st Degree Murder Charges. Following his arraignment, he was held without bail.

According to the Middlesex County District Attorney’s Office, Lauren Astley’s car was found parked at the Wayland beach after she was reported missing late Sunday night. She was last seen leaving work at the Natick Collection at 6:30 that night. Yesterday morning, however, Lauren Astley’s body was discovered by a man along Route 27, partially submerged in a marsh.

END_OF_DOCUMENT_TOKEN_TO_BE_REPLACED

Edward Corliss, 64, is the man charged with the Murder of a Nepalese convenience store clerk the day after Christmas at Tedeschi’s in Jamaica Plain. In addition to those Murder and other related charges related to that incident, a Suffolk County Grand Jury has now indicted Corliss in an assassination plot for trying to convince a fellow inmate to murder 3 anticipated witnesses listed to testify against him.

According to the Suffolk County District Attorney’s Office, Corliss, who is being held pending trial at MCI Cedar Junction in Concord, Massachusetts, allegedly asked a fellow inmate to kill the 3 witnesses. Since he is being held, Corliss allegedly offered the other inmate proceeds from a future armored car heist he promised to carry out when he is released. He also allegedly offered the inmate additional money if he kept quiet about the robbery.

As reported in the Boston Criminal Lawyers Blog on March 5, 2010, Edward Corliss allegedly entered the Tedeschi’s concealing his identity with heavy clothing, a scarf and wig, and attempting to rob the store clerk, Surendra Dangol. A surveillance video captured Corliss entering the store, as well as his allegedly pointing a gun at Dangol’s chest and shooting him. Boston Police Officers arrested him several weeks later when they were able to match the getaway vehicle to Corliss’ home.

END_OF_DOCUMENT_TOKEN_TO_BE_REPLACED

Stephen Woodard, 20, was in the East Boston Division of the Boston Municipal Court this past week answering criminal charges of Armed Robbery and Drug Charges. In custody, Woodard was in custody and was to be transported by the Suffolk County Sheriff’s Department to jail pending his criminal case.

Woodard, however, managed to escape from the Suffolk County Sherriff’s jail van, steal a Department of Public Works vehicle that was parked with the keys inside, and get away. Although he was chased through Chelsea, Revere, Everett and Malden, Woodard managed to abandon the DPW vehicle and escape. He is still being sought…

After having been arraigned in Charlestown District Court on Armed Robbery charges for allegedly robbing a man at knifepoint in Charlestown, Woodard was brought to the East Boston Court because he had committed the Armed Robbery while he was out on bail on unrelated Drug Crimes charges.