In response to a Craigslist ad, three persons traveled from Rhode Island to Milton, Massachusetts to purchase a television they saw advertised on the Craigslist website, only to be robbed at gunpoint of over $1,000.

According to the Milton Police Department, the incident occurred at a foreclosed home on Randolph Avenue in Milton, Massachusetts. Upon arrival, one of the three men went to the door of the home and was ordered inside at gun point. Once inside, he was pistol-whipped and robbed. The robbers then went to the car and also ordered the other two individuals into the home at gunpoint. One of them was also pistol-whipped, and they were both also robbed.

At this time, no further information has been released regarding any possible leads into this investigation. If apprehended, the suspects face various criminal charges, including Kidnapping, Assault & Battery with a Dangerous Weapon, and Armed Robbery.

END_OF_DOCUMENT_TOKEN_TO_BE_REPLACED

Paul Galzerano, 58, of Groveland, Massachusetts, was arraigned today in Essex County Superior Court in Salem on 3 counts of Bribery and 4 counts of Larceny Over $250 for allegedly defrauding Beverly Hospital of almost $500,000.

The Essex Count District Attorney’s Office alleges that between 2003 and 2006, Galzerano was responsible for overseeing a multimillion dollar renovation at Beverly Hospital and during that time, he repeatedly orchestrated kickbacks from certain contractors. Galzerano and contractor Brian Lemay, 53 of Andover, are accused of inflating the price of proposals; Lemay would accept the work for excessive funds, and then kickback money to Galzerano in the form of payments to Galzerano’s personal credit cards and his home mortgage. Galzerano is additionally alleged to be responsible for the theft of numerous antiques and paintings from Beverly Hospital.

The contractors charged in connection with this Bribery scheme include Brian Lemay of Andover and Alfred Cunsolo of Methuen, both charged with Larceny; as well as John Kane of Hanover, also to be charged with Bribery.

END_OF_DOCUMENT_TOKEN_TO_BE_REPLACED

The Boston Police Department reports that Timothy Carlson, 50, of Roxbury, Massachusetts, was arrested last night for breaking into and robbing the Mission Church in Roxbury.

Officers responded to the area of 1547 Tremont Street at 10:43 p.m. last evening on another call saw Carlson holding a white bag. When they attempted to speak to him, Carlson allegedly ran and jumped over a barricaded construction site. As Boston Police Officers pursued into the construction site, they observed numerous discarded dollar bills.

Ultimately, Carlson was found hiding behind an electrical box, where he began shouting expletives and allegedly resisted arrest. A search of the area revealed numerous dollar bills where Carlson allegedly jumped the wall and a white cloth filled with prayer slips.

END_OF_DOCUMENT_TOKEN_TO_BE_REPLACED

Jenny Thomspon, an Olympic gold medalist and winner of 12 overall medals over four Olympic games was the victim of an Assault and Attempted Robbery of her scooter yesterday in Brookline, Massachusetts.

Brookline Police report that Thompson was on her scooter in the area of Harvard and Verndale Street at about 10:00 p.m. last evening when a dark colored car pulled up beside her with its headlights out and two men exited the car. One of the men went up to Thompson and punched her in the face and he and the other man tried to steal her scooter.

Sometime thereafter, Brookline Police arrested Luis Santos, 18, of Dorchester, Massachusetts, and two other teens for allegedly stealing a different scooter, on which they were traveling the wrong way down Beacon Street. Although these youths are being investigated with regard to the Jenny Thompson incident, Brookline Police report that they these may just be unrelated incidents.

END_OF_DOCUMENT_TOKEN_TO_BE_REPLACED

Boston Police Officers responded to a report of “an Armed Robbery in progress” at 10:30 p.m. Thursday evening. Once on scene, police officers met with the victim who reported that six or seven men had tried to rob him of his bike. Once the group of young men surrounded him, the youngest of them, a 13 year old, allegedly demanded the bike and his wallet, while another boy pointed what was alleged to be a gun.

As the Boston Police Officers were speaking to the victim, the 13 year old old allegedly rode another bike near the area, where he was identified as one of the suspects. Although he gave several false names to police officers, his identity was eventually determined and it was also discovered that he several outstanding arrest warrants.

It is not clear whether any gun or weapons were recovered.

END_OF_DOCUMENT_TOKEN_TO_BE_REPLACED

A man attempting to rob Llanera Market in South Boston earlier this week got stuck in the metal grate he tried to shimmy between.

The security camera caught Phillip Donahue breaking into the store on East 8th Street by starting to bend the metal grate at approximately 2:25 a.m. By 3:30 a.m., he had gotten his head through but ended up getting stuck.

When Boston Police arrived on scene, the man was still stuck between the metal grates. He was immediately arrested and charged with Breaking & Entering at Nighttime to Commit a Felony.

END_OF_DOCUMENT_TOKEN_TO_BE_REPLACED

Adam B. Wheeler, 23, a Harvard University senior, is scheduled to be arraigned tomorrow in Middlesex Superior Court for various Theft Crimes involving allegedly forging academic documents, transcripts, and for collecting over $45,000 in financial aid and scholarships under false pretenses.

According to the Middlesex County District Attorney’s Office, Wheeler was admitted by Harvard as a result of falsely claiming that he had attended Massachusetts Institute of Technology and Phillips Academy in Andover, neither of which he attended. Harvard investigators discovered that he had once attended Bowdoin College in Maine, and improperly used referenced from that school when applying to Harvard, even though some of the referenced had never met him.

Harvard administrators became suspicious of Wheeler when he applied for the prestigious Rhodes and Fulbright Scholarships, and then discovered that he had allegedly plagiarized another student’s work. Further investigation discovered that Wheeler had also fabricated his Harvard transcript by giving himself straight A’s.

END_OF_DOCUMENT_TOKEN_TO_BE_REPLACED 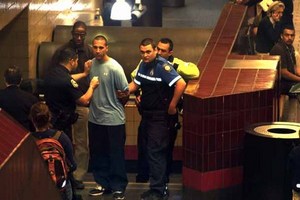 Robert J. Carney, 34, of Everett, Massachusetts, was arrested this morning on the MBTA’s Red Line after robbing the Citizens Bank branch at Harvard Square. Identified by other passengers on the train after observing him with red dye on his hands, the MBTA returned the train to the station at the request of the Cambridge Police Department, where Carney was arrested.

The Cambridge Police report that Carney walked into the Citizens Bank in Cambridge on Kennedy Street and passed a note to the teller demanding cash. After handing the money over to Carney, he then fled on foot towards the nearby Harvard Square Red Line Stations. It’s at this point when the dye pack in the bag given to him by the bank teller exploded. Carney, however, continued through the station and boarded an inbound train to Boston.

Carney is currently held over the weekend by the Cambridge Police Department on bail, and scheduled to be arraigned on Monday, May 10, 2010, on charges including Bank Robbery.

END_OF_DOCUMENT_TOKEN_TO_BE_REPLACED

Two men were arrested last week in Brookline, Massachusetts, for allegedly Trespassing in a parking lot where recent car break-ins have been reported. Victor Edwardo Pena, of Jamaica Plain, and Nathan Ortega, of Dorchester, were both charged with Possession of Burglarious Tools, Receiving Stolen Property, and Trespassing.

The Brookline Police Officer who pulled the car over noticed a tool commonly used to break car windows, and also a flashlight under the Pena’s, the driver’s thigh. After ordering the men out of the car, the Brookline Officer also saw a screwdriver between the driver’s seat and door. Because the recent car break-ins were allegedly done using a flathead screwdriver, the officer then pat-frisked the occupants and searched their car, finding eight flathead screwdrivers, a black cap, two gloves, and a flashlight.

A subsequent inventory search of the car also revealed several GPS units, backpacks, keys, and personal effects bearing the names of other people. According to Brookline Police, these items were then traced to motor vehicle break-ins of at least 26 cars in Brookline, Boston, Cambridge and Norwood.

END_OF_DOCUMENT_TOKEN_TO_BE_REPLACED 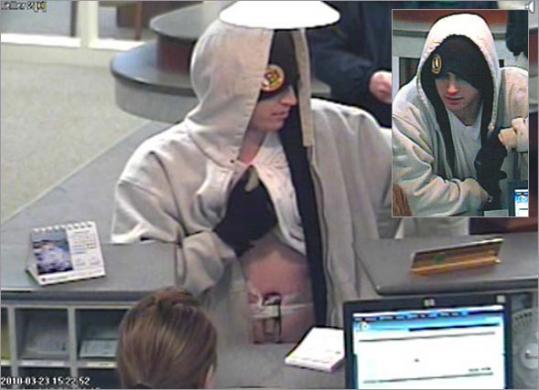 In the latest in a string of Bank Robberies over the past several days, the Boston’s FBI Office has taken the lead in the investigation. In the latest bank robbery, which occurred this past Tuesday in Rockland, a man in his early twenties robbed the South Coastal Bank and displayed an explosive-looking device taped to his chest.

According to the Rockland Police Department, the suspect threatened to “blow something up” if he wasn’t given the money. It’s unclear whether the device was actually explosives, but the man did manage to escape with an undisclosed amount of cash. Boston’s FBI Office believes that this Rockland bank robbery may be related to the Sovereign Bank robbery in Norwell.

Though the Boston FBI is not yet saying that these bank robberies are all related, they are also investigating several other bank robberies that occurred in Stoughton, Hanover, and Milton.